Robots have already begun to think on their own. If you don’t recall that line from a Twilight Zone episode, here’s the premise in a nutshell. The episode begins with an alien ship landing on Earth and makes friendly contact with humans. Then the aliens invite a bunch of humans to return to their planet with them, and they agree to go on a happy adventure. One of the main lines reoccurring in the episode is that the alien keeps mentioning a book called To Serve Man. Just as the humans are about to launch away on the alien craft, someone finally deciphers what the book means. It’s not a guide on how to worship man, “It’s a cookbook!” It’s possible we have reached that point with AI-driven robots that will out-think, out-perform and outlast the human race if we are not cautious.

In an op-ed from RT.com, writer Robert Bridges points out some issues with creating a new life form that can actually eat us for lunch any time it decides to.

Despite such grave predictions from the entertainment industry, as well as great science fiction writers, like George Orwell and Aldous Huxley, mankind has willingly saddled the wild beast known as technology and is prepared to ride it where it would lead us. And therein, I believe, lays the tragedy: our belief that technology is completely beyond our ability to control. Adhering to such a stance could be the cause for our ultimate downfall. The idea of computers increasingly deciding our fate brings to mind a slew of sci-fi Hollywood productions that invariably depicts the future as a dark, sinister and altogether inhospitable place. Tech-noir box office hits, like Blade Runner (1982), The Terminator (1984), Brazil (1985) and The Matrix (1999) have reinforced the singular message: Where we are now is a far better place than where we are heading.

Although it certainly is a frightening prospect to anticipate that robots will become able to control us, we need to be ready if they become a true life form.

Sophia bot freezes when asked how corruption in #Ukraine can be defeated – MP https://t.co/DLBeGOm2yV pic.twitter.com/GqBKweLOst

Then there is the matter of sex dolls that have become an integral part of our society in minor ways but will indefinably increase in presence.

At the same time, robots and artificial intelligence are revolutionizing everything – from the way we do our shopping to how modern wars are being fought. The example at the top of the article of judges relying on AI to determine the fate of criminals in their courtrooms highlights one of the great downsides of this revolution in artificial intelligence – the veritable earthquake that is going to occur in a vast number of professions. When humans suddenly awake to the reality that they are in competition for a job against a machine that never gets sick, never needs a vacation, never needs a paycheck, while performing the job far better than the frail human, then it doesn’t require much imagination to see where we are heading on the jobs front.

There is still time to achieve that goal, but the technology clock is ticking – exponentially. 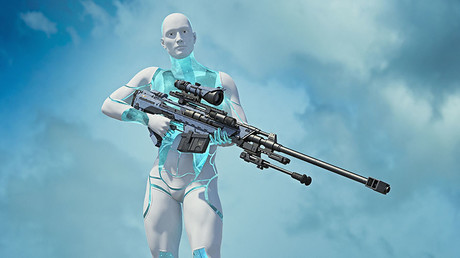 Would you trust AI with a gun?

The idea of using robots to fight our battles for us is as old as the ancients. And it seems we are closer than ever to achieving this goal. The advances being made with robotics is both heartening and frightening at the same time.  Perhaps they can replace live 18 year old soldiers on the battlefield and in the infirmaries. But more likely they will become companions or assistants to real soldiers.  And that will lead to even more devastation of the enemy and his area.

In this story from The Hindu they explain how they are going about training robots to be effective partners to soldiers by teaching them how to win on video games. If you have seen the videos of drone swarms that are weaponized and turned loose, then you know how terrifying the future of warfare is going to be.