It’s really a case of simple mathematics. Take away an amount of money from a pile and you have less money left. When workers stop paying taxes on their employment, it must be made up somehow—either in reduction of services, or taxing others at a higher rate.

While robots make workflow more efficient, taking away salaries as a taxable source of revenue for governments creates an enormous income gap. However, Britain’s Labour Party leader, Jeremy Corbyn, thinks he has an answer.

“Jeremy Corbyn wants companies that profit from replacing humans with robots to pay more tax because he believes automation is a threat to workers. The Labour leader wants to use the money to create a fund to retrain staff who lose their jobs because of new technology. He said that we should all get the benefits from greedy global corporations such as Amazon, which have made a great deal of money out of incredibly advanced technology.”

Who can say he is wrong? The more machines take away tax dollars, the more governments need to develop a system to replace those missing taxes and jobs, unless new human-filled jobs are created.

In his speech to the Labour conference recently, he set out plans to “manage” robotics and technology “for the benefit of society as a whole.”

Which will mean taxing the machines somehow. Of course his opposition party in Great Britain, The Tory Party, will have something to say about it as well. But either way, the decline of income taxes  as a revenue source is a very real threat unless robots are taxed in a similar way to humans. 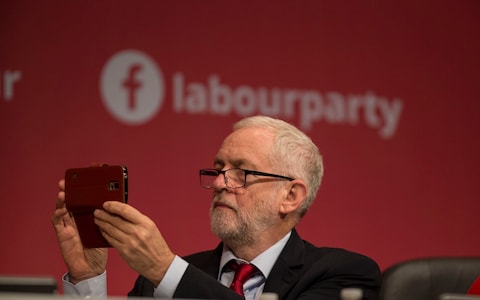 Mr Corbyn spoke about “greedy” global corporations that have, “made a great deal of money out of incredibly advanced technology.” Credit: Heathcliff O’Malley