Clearing Up The Cloud

An amazing 70% of the world’s internet traffic loves a building in Virginia so much, that it visits there daily, according to a CBS News Sunday Morning program.  In a recent on-air piece about The Cloud and its base in Loudoun County, Virginia, reporter David Pogue of Yahoo Finanace took the camera crew into The Cloud’s house.

These days the Cloud is everywhere. Tv ads, magazines, airport terminal banners and of course in our computers. The cloud works like this, in case you are ever asked and weren’t sure:

In the beginning, we all kept our own stuff on our own computers. In the new world of the Cloud, though, your computer files don’t have to be on your computer; they can be stored out on the internet–alongside everyone else’s–in huge, centralized buildings called data centers. Your computer or phone can then fetch your files on the spot, wherever you happen to be.

Amazon Web Services is the Big Daddy of Cloud Service companies, bigger than the next 14 companies combined. But getting in to see one of these data centers is no easy feat. This is the large data center called RagingWire, in Virginia. 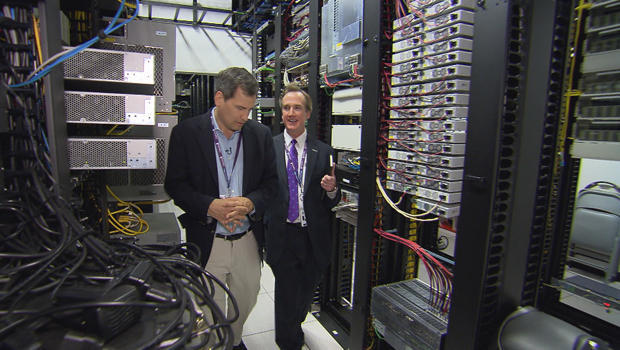 “This is the Cloud,” Leach said. “Basically, in this room, ballpark, there’s about three million websites running right now.”

The Sunday Morning piece went on to show the security that you have to pass through just to see the data racks. To learn more about the love affair between Virginia and The Cloud, check these links.

“A Prehistory of the Cloud” by Tung-Hui Hu (MIT Press), in Hardcover, Trade Paperback and eBook formats; Available via Amazon