AI training moves into a new area of learning.

AI Training Moves from 2 Earlier Models to New One

As the world’s economies commit more resources to AI and quantum computing, the focus of how to train and use AI shifts nearly every 10 years. Though AI may appear to provide answers to the world’s problems, it remains primitive, including in how it’s taught to process data.

MIT Technology Review went to of the worlds largest open source databases known as arXiv, (pronounced “archive”) to download 16,625 papers available in the “artificial intelligence” category up to November 18, 2018. The story tracked the words mentioned through the years to see how AI references evolved. 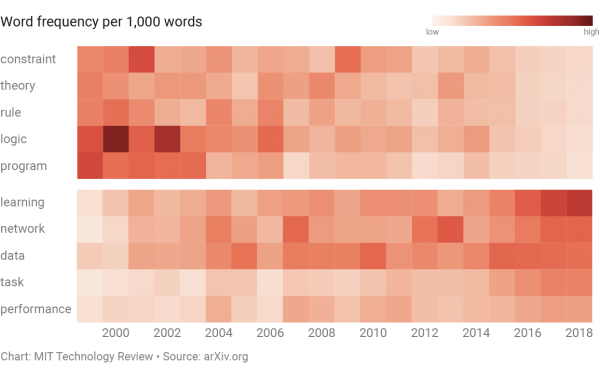 Through their analysis, they found three major trends: a shift toward machine learning during the late 1990s and early 2000s, a rise in the popularity of neural networks beginning in the early 2010s, and growth in reinforcement learning in the past few years.

The study admits that they only fed a fraction of the number of papers being offered up then. The researchers could only go back to 1993 to use papers to feed to arXiv. Still, they developed some interesting conclusions.

The use of words like “logic” “constraint” and “rule” saw the greatest fall off, while words like “network” and “performance” saw the highest usage.

It seems part of the reason is the change from attempting to recreate common sense with machines by supplying the rules, instead, they turned to machine learning to allow the machines to set up its own rules, to optimize its data.

As well as the different techniques in machine learning, there are three different types: supervised, unsupervised, and reinforcement learning. Supervised learning, which involves feeding a machine labeled data, is the most commonly used and also has the most practical applications by far. In the last few years, however, reinforcement learning, which mimics the process of training animals through punishments and rewards, has seen a rapid uptick of mentions in paper abstracts.

The article we curated was written by Karen Hao for technologyreview.com is quite extensive and supplies helpful graphs to explain the changes how AI is being taught, and the results of their arXiv tests.