The Riner family watches as Jared Workman tests out Benni, a robot designed to interact with children on the autism spectrum, in Draper, Utah. (Evan Cobb/The Daily Herald via AP)

Autism Bot ‘Benni’ Seeks to Be a Child’s Best Friend

Designed to supplement therapy for children on the autism spectrum, Benni the robot looks similar to BB-8 from Star Wars. Only 14 inches tall, it rolls around and can get “bored” and “mad” if a child ignores it. Similar to a large Tamagotchi, it plays educational games with children using apps. It’s designed so that children can interact with it without a parent.

“”We often say we want Benni to be the first friend of many friends to come,” said Jared Workman, a BYU student and founder of Early Intervention Robotics, or EI Robotics. “The goal is the child learns interdependent play, asking and answering questions and develops empathy.”

Benni acts as part robot, part therapist and part of a new concept that allows an autistic child to connect to and interact with it.

It teaches skills and motor movements that the child needs to continue to grow. It involves kids with speech practice, with dance moves, and with social skills that all kids of any developmental level needs.

Cookie Riner, 2, speaks to Benni, a robot designed for children on the autism spectrum, at her family’s home. (Evan Cobb, The Daily Herald)

Carebots used to with recovering patients and robot surgeons to repair patients are among the advances the National Health Service in Great Britain made massive investments in to ensure quality health care.

So far, 60 da Vinci machines in Britain offer assistive robotic surgery. With enhanced 3D vision and specialized instruments such as a tiny cameras and wrist tools, surgeons can operate with precision, deep inside the human body. 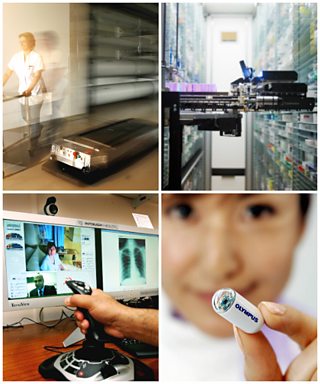 Scientists, rather than surgeons, have led the medical robotics revolution, bringing pioneering techniques out of their laboratories and into operating theaters. However, it’s feedback from the surgeons working with new technology that is driving medical advancements forward.

From telemedicine to robot pills swallowed for various treatments or exploring in the human body, the future of medicine here in America or in Great Britain will depend on robotics.