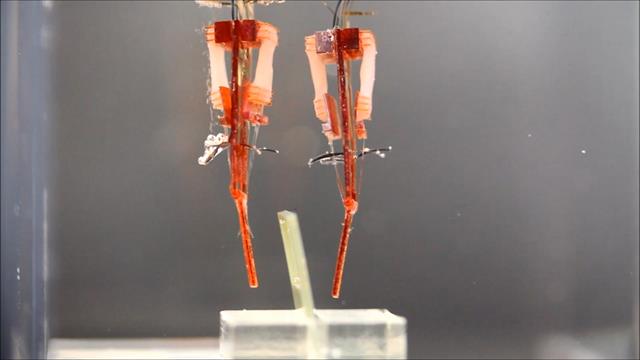 Some might call it a Frankenstein combination. National Geographic writer Sarah Gibbens recently reported a story on the merging of mice and men, in a sense, from a lab in Tokyo.

As if the line between human and machine wasn’t already blurry enough, researchers in Tokyo have developed a new method for using living rat muscle tissue to assist in creating robotics. The “biohybrid” design, described  in the journal Science Robotics, simulates the look and movements of a human finger. Video shows how it bends at the joint, picks up a loop and places it down. It’s a seemingly simple movement but one that researchers say lays the groundwork for more advanced—and even more lifelike—robots. (Such as Sophia, the robot that looks human-like.)

“If we can combine more of these muscles into a single device, we should be able to reproduce the complex muscular interplay that allows hands, arms, and other parts of the body to function,” says study author Shoji Takeuchi, a mechanical engineer at the University of Tokyo. “Although this is just a preliminary result, our approach might be a great step toward the construction of a more complex biohybrid system.”

The research team decided to use living muscle tissue because plastic and metal limited the movement and flexibility of their robot. To grow its muscles, they layered hydrogel sheets filled with myoblasts—rat muscle cells—on a robotic skeleton. The muscle was then stimulated with an electric current that forces it to contract.

It’s an efficient use of technology and medicine involving growing the parts, then attaching to them to other manufactured parts.