Boston Dynamics to Unleash Robot Dog for Security, as Aide

Boston Dynamics to Unleash Robot Dog for Security, as Aide

The four-legged Boston Dynamics robot that became an internet star when it featured in a series of viral videos is set to go on sale next year. The U.S.-based company announced that the semi-autonomous SpotMini will go into production in mid-2019. Founder Marc Raibert announced the robot’s production date at TechCrunch Sessions Robotics conference in California last week, saying the SpotMini would be suited to office environments.

“The SpotMini robot, the small quadruped, is one that was motivated by thinking about something that could go in an office, with a more accessible place for business applications, or in a home eventually,” said Raibert.

Boston Dynamics is currently developing a number of apps for the SpotMini that would enable it to be used for surveillance or construction. The company will also invite third parties to develop their own applications.

Designers and code writers can’t seem to resist creating robots that mimick animals of all shapes and sizes. Some of the new “animals” we can expect to see are will be autonomous robot bees, which Walmart filed a patent for earlier this year; robotic fish for documenting marine life by MIT; and a robotic timber maker by ETH Zurich researchers.

Raibert said Boston Dynamics, which is known for its cutting-edge research and development, had been considering branching into commercial robots since its acquisition by Google X in 2013. The company is now wholly owned by Japanese conglomerate the SoftBank Group. 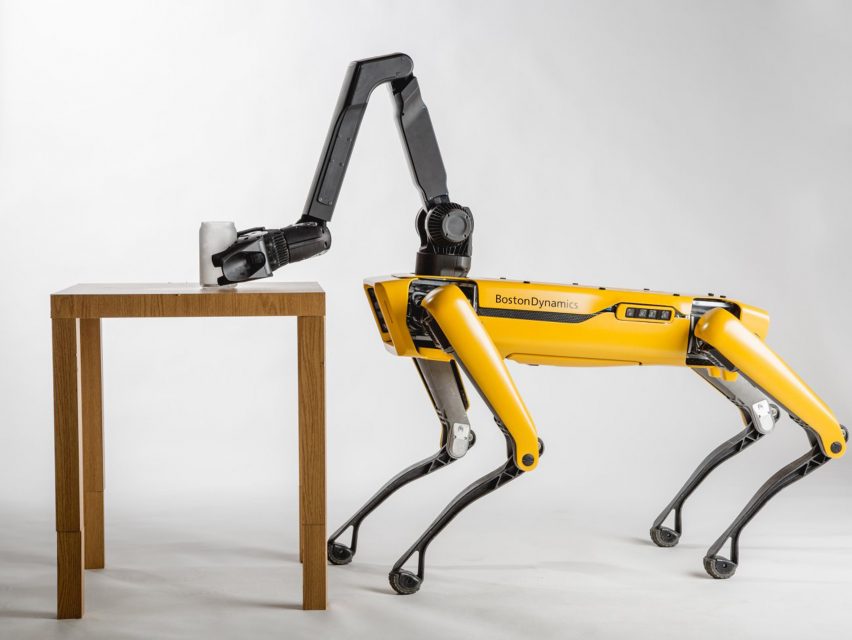 SpotMini will have several moves to show off.

Security robots are already operational in some workplaces, although their presence isn’t always welcomed by the humans around them. Last year, a Knightscope K5 security robot tasked with warding off homeless people from a San Francisco building was knocked over and smeared with excrement by an angry member of the public.