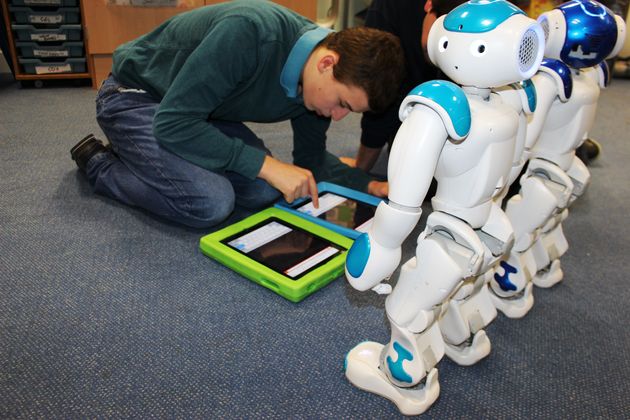 Children work with Steve the Robot at the Prior’s School.

An amazing new approach to autism, outlined in an article by Amy Packham in the British edition of the Huffington Post, describes how using robots to work with autistic children is showing promising results.

Jamie Lawrence’s eyes light up when an interactive robot is placed in front of him. He engages with it, calls it his “friend” and beams when the robot raises its arms to let him know he has answered its question correctly.

Because so many people with autism have difficulty relating to others facial expressions or tone of voice, Steve the Robot has no facial features and no variation to its voice. This has made autistic children much more relaxed and able to interact. Steve does not replace the class teacher, but works more as a digital assistant. The creation of  Emotion Robotics, which provides products for education, businesses and developers, the robot represents the launch of the company’s ‘Assist for Autism and Special Needs’ program, which started in November 2017. The effort provides teachers with a simple-to-use robot, preprogrammed  to help children with autism develop concentration, language and socialiation by positively stimulating students with robot feedback.

Classes with the Steve the Robot are kept short, lasting about 20 minutes. It might start with just a hello, choosing a song to sing, a learning activity, and then goodbye. With each child displaying autism in their own unique way it was imperative that the robot be made appealing on many levels.

“Many of our young people have difficulty relating to others because of their autism, this means that looking at an adult and taking onboard instructions can be difficult,” says Sue Piper, director of education at Prior’s Court in Thatcham, Berkshire, where Jamie goes to school. Piper goes on to say: “It’s very useful as a teaching tool for things like learning animals, colours and counting, as it’s a great motivator. Some children even sing, dance and sign along to songs with the robot. In groups, it’s also an excellent way of helping to teach about taking turns. The robot becomes the focal point, but a teacher is needed to facilitate and support the work.” 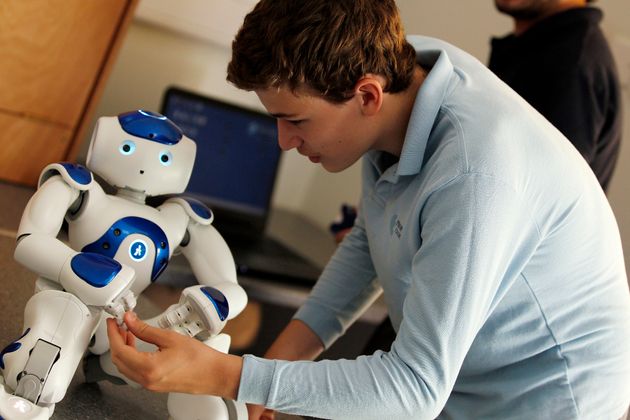 Jaime Lawrence, 14, is a student at the school

The Prior’s Court school currently has only one robot, but that is about to change. Recently the team from Emotion Robotics visited with a second one that interacts with Steve. Prior’s Court is now fundraising for a second robot with some additional software made specifically for children severely affected by autism and learning difficulties.

Here are some bonus stories regarding autism and schools.

When The Mainstream Runs Dry – Autism And Schools Part 1