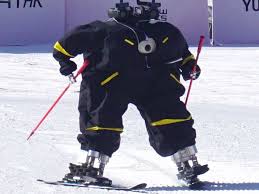 In the world of robotics, certain companies are light years ahead of others. Some corporations have tasked their teams with having robots learn a particular set of skills. Some are better at gymnastics, some excel at climbing stairs or avoiding being knocked over.

Robots are proving to be equal to humans in many fields, making it likely that technology will surpass human ability in performing certain tasks. Now it seems even sports and recreation have been overrun by our metal, plastic and wired creations. For example, robots can now hit the slopes for an afternoon of shushing.

In this year’s Winter Olympics, the host country put out the call for skiing robot teams⎯and the call was answered.

The world’s first “Ski Robot Challenge,” organized by South Korea’s Ministry of Trade, Industry and Energy, saw eight robots from various universities, a research institute, and a private company, compete for a $10,000 prize in a downhill skiing event.

To no one’s surprise they even offered medals to the winning contestants.

In the autonomous snow skiing event, Minirobot’s Taekwon V scooped the gold medal, while the Korea Institute of Robot and Convergence’s SKIRO nabbed silver, with Kookmin University’s RoK-2 following up with the bronze.

It was reported in Reuters’s News that there were several delays in some of the downhill human’s Olympic competitions, due to terrible weather at the top of the slopes. The rough conditions were no problem for the robotic skiers.

Speaking to Reuters, Lee Sok-min from the Taekwon V team said, “I heard the Alpine skiing has been postponed again due to wind conditions. That’s a pity. Robots are doing fine here.”

At the pace of today’s robotic advances, it may not be long before a network decides to put on the Robot Olympics.

Click on the link for a video from the 2018 Winter Olympics featuring the drone light show put on by South Korea. Over 1,200 drones were used to create the Olympic Rings in the air, grabbing the Guinness Book Of Records title for  “most unmanned aerial vehicles airborne simultaneously.”