Alibaba Rakes In $25B on ‘Singles Day’

On Nov. 11, 2017, Alibaba.com, the giant Chinese e-commerce machine, smashed its own one-day sales record with an incredible estimated haul of $25 billion in sales. That’s $25 Billion, with a capital “B.” The record surpasses any other known e-commerce sales record, including Alibaba’s record a year prior

In 2016, Jack Ma, Chairman of the Alibaba Group, posted a one-day sales number of approximately $18 billion, give or take a yuan or two. This year, Alibaba increased its one-day sales record by nearly 39%. Singles Day, is celebrated by Mainland Chinese people who are single on November 11, because of the four numeral ones, symbolic of being single. In the past such celebrations were for bachelors, but now women celebrate it, too. While parties and entertainment events are part of the holiday, shopping for oneself or for a special “one” and ending one’s solitary status is also part of the festivities, hence the need to buy gifts or engagement rings.

“In terms of scale it just dwarfs any other event out there,” said Ben Cavender, Shanghai-based principal at China Market Research Group.

For some perspective, keep in mind that Singles Day sales exceed the USA’s Black Friday and Cyber Monday COMBINED.

“This is a big event for China, for the Chinese economy,” Joseph Tsai, Alibaba’s co-founder and vice chairman, said. “On Singles Day, shopping is a sport, it’s entertainment.”

While the event drives Chinese shoppers to scout around for the best bargins, delivery men and robots are preparing to deliver 1.5 billion packages over the following 6 days.

The amount of sales and money being counted is way to large to be completely transparent. This has interested the U.S Securities and Exchange Commission to launch a 2016 probe into Alibaba’s brand of accounting. As yet that investigation has not been resolved.

The giant bump in sales is due to  rising disposable incomes of China’s “over 300 million middle-class consumers,” Tsai said, not that the trend would continue to drive the company’s online sales. “This powerful group is propelling the consumption of China,” he said. 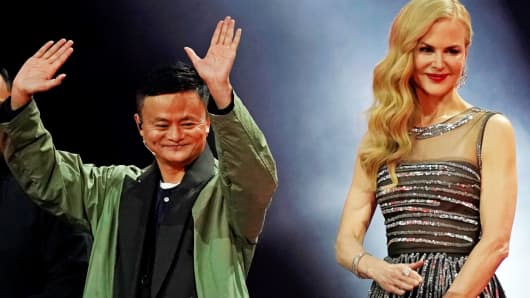