Could a sexual encounter with a robot be in your near futue? Possibly. Sex robots are in the current wave of AI driven ideas in the market place.  Actually some sex robots are already in service at various locations around the world. But according to the following story, designers are going to have to build them to be a little more resilient and not so fragile.  Check it out…

It has not been a great day for Samantha the sex robot: The blonde-haired, blue-eyed doll worth over $4,000 was reportedly inappropriately groped by sex-hungry men at the Ars Electronica Festival in Linz, Austria.

Her inventor, Sergi Santos, shared that “she was heavily soiled” by the men. Santos added that two fingers were broken whilst they were mounting Samantha’s breasts, legs and arms, causing her to break down entirely.

Before being totally destroyed, Samantha was roaming around and talking to visitors at the festival, giving out warm hugs and asking how they were. Artificial intelligence software robots like Samantha are able to respond in a simple manner to several different languages and can sense when they are being touched.  After the wild frenzy, which left Samantha’s breasts destroyed, Santos said the sex robot would have to fly out to Barcelona, where it would be cleaned and fixed.

It is a fact that sex-bots are created and sold world wide, with prices ranging from $1500 to $15,000 a piece.  In Spain, a company has opened an all robot brothel. According to the owners of Lumidolls, it has been well recieved in Barcelona and they are looking to expand globally.

There are four dolls to choose from including blue-haired Aki, whose look is inspired by Japanese anime
The agency’s website claims customers will “hardly distinguish” the dolls from a real woman.

Each of the dolls even has a profile describing their attributes, from Lily’s “angelic face” to Katy’s “penetrating gaze”.

The dolls are made using thermoplastic elastomer, a polymer renowned for its softness, and the website is keen to point out the dolls are “properly disinfected with special antibacterial soaps” before and after each service.
Nonetheless, visitors are urged to use a condom.

The Sex Of The Future? 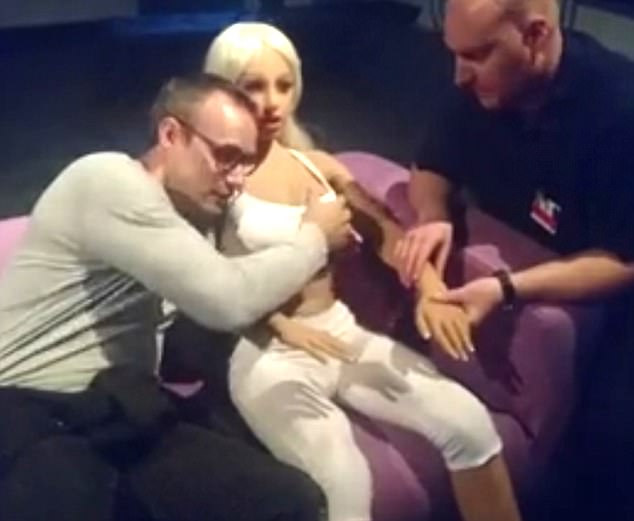