When a Big Data breakthrough makes headlines, it’s often in the context of cutting-edge developments that improve our quality of life today and promise a brighter and more prosperous future. But what if by looking into the past we can also gain previously unseen insights into how societies function?

This is one aim of cyberSW, a forthcoming project spearheaded by researchers at the University of Arizona that aims to amass and analyze previously disparate archaeological databases about the American southwest in order to better visualize archaeological findings. By sifting through this digitized “deep history”, cyberSW researchers can potentially uncover novel trends hidden in the archeological record to uncover how societies —in the Pre-Columbian past as well as today— evolve and shift with the centuries.

When we think about some of the most pressing questions facing society today — on topics ranging from immigration to inequality to overpopulation — it might be helpful to consider how humans have handled similar issues throughout history, suggest researchers at the University of Arizona.

To help provide researchers, scholars and the general public with a “deep history” understanding of some of the grand challenges facing society, Mills and fellow UA researcher Sudha Ram are leading an interdisciplinary National Science Foundation-funded project to build an online system that pulls together and synthesizes archaeological data spanning several centuries of U.S history.

The project, called cyberSW, focuses specifically on pre-Hispanic archaeological data from the American Southwest — Arizona, Utah, New Mexico and Colorado — from A.D. 800 to the 1500s, shortly after the arrival of the Spanish in the region.

Under the leadership of Mills and Ram, cyberSW investigators will work to pull together massive amounts of data, from hundreds of disparate datasets on Southwest archaeology, into one centralized online system. Visitors to the website will be able to not only easily access data that is currently decentralized, but also view relationships between that data to better inform their research and understanding of the Southwest’s rich history and its possible implications for modern challenges. 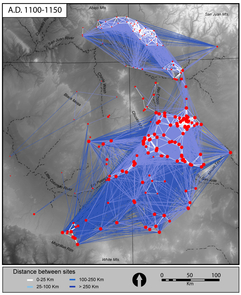 “This is not just a database,” said Ram, professor of management information systems and director of the INSITE: Center for Business Intelligence and Analytics in the UA’s Eller College of Management. “We’re building a knowledge discovery system that integrates multiple archaeological databases and various artifacts and objects, and we’re trying to figure out relationships that aren’t already known. People can query the website and it’ll show them various data and how they’re related to each other, and they’ll be able to run large-scale network analysis and statistical analysis that will support various stakeholders, including researchers and students, as well as the public.”

When completed, the cyberSW system will house, among other things, documents, images, maps and population data, along with tools and tutorials for conducting network analysis through the site. There will also be a citizen science component, in which members of the public will eventually be able to contribute to the site’s content.

The hope is that the system that can provide a long-range historical perspective on issues of concern in modern society, Mills said.

“We have decadal- and centennial-scale data we can use to look at long-term changes, so we’re interested in broad social science questions like the evolution of inequality,” she said. “There are more people migrating in the last five years in human history than ever before. What happens when people migrate into an area? What happens when people aggregate and become urban? How do societies persist? Why do some societies persist and others collapse?”

read the full story at uanews.arizona.edu