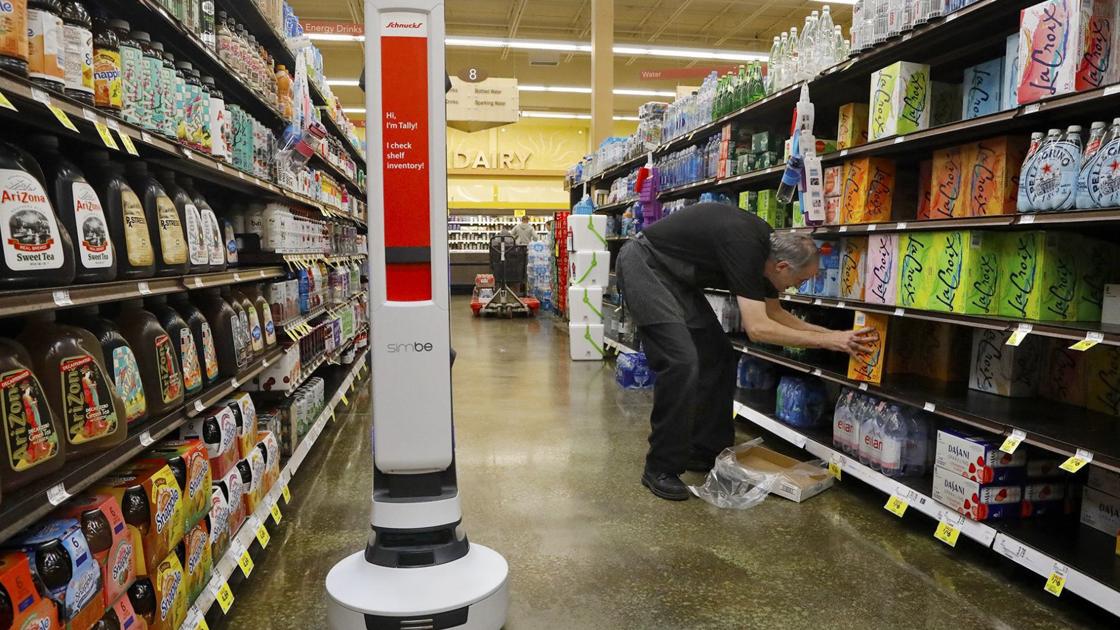 Tally, the shelf-auditing robot, moves up and down the aisles documenting inventory on Monday, Oct. 29, 2018 at the Schnucks grocery store in Des Peres. At right, clerk Bill Degenhart, a 31-year employee, re-stocks the shelves after Tally reports its findings to inventory management. Schnucks Markets plan to expand the robots to at least 15 of their area stores. Photo by J.B. Forbes, St. Louis Post-Dispatch

Coming to a grocery aisle near you⏤robots that work the store and even interact.

Those stores are near some of the 16 Shop ’n Save stores that are expected to close this month as the former competitor discontinues operations, and Tally is supposed to help manage any new influx of customers to Schnucks. Seven other stores will be chosen for a Tally robot installation over the coming months based on any increased sales volume.

The robot roll on a base is 38 inches tall and an extension can make it stretch taller to scan out-of-reach shelves with cameras atop a circular base that resembles a Roomba vacuum. Their two blinking eyes on a digital screen make it robot appear friendly. Each weigh 30 pounds.

The union for Schnucks workers, the United Food and Commercial Workers Local 655, said the union plans to discuss Tally with Schnucks officials in coming weeks, but doesn’t expect any jobs to be lost.

“If we walk down the road of this new technology, which is great, we just need to make sure we protect those individuals that gave the company the ability to make those advances,” Cook said. “Whenever there’s change, there’s questions.”