Global Designs Feature Cars with No Steering Wheel or Pedals

The newest member of the Volkswagen family, the I.D. Vizzion, it has no steering wheel, no pedals and no dashboard. It does have AI and Microsoft Hololens augmented reality. The concept sedan is appearing at the 2018 Geneva Motor Show and is the fourth member of Volkswagen’s I.D. family of electric concept cars, joining the I.D. Concept hatchback, I.D. Buzz microbus and I.D. Crozz SUV concepts. (VW seems to be sticking with a double-Z naming theme.)

This vehicle has all-wheel drive and is fully electric. The controls of the I.D. Vizzion will be voice or gesture controlled while the occupants sit back and ignore the driving.

The I.D. Vizzion concept uses a variety of sensors to detect the world around it and AI to navigate itself to destinations. Photo via Volkswagen

If you like all the bells and whistles on your “4-wheeled computer,” the I.D. Vizzion has plenty. Even getting into the vehicle is part of future tech.

Artificial intelligence even flavors the “hop in” part of the I.D. Vizzion concept. The sedan uses biometric facial scanning to recognize its passengers and automatically greet them with LED lights and motorized opening suicide doors upon approach. (If you have a twin, an electronic key can also be used to tell passengers apart.)

Say goodbye to gas-guzzlers, steering wheel covers and little green scent trees hanging from your rearview mirror, as there won’t BE a rearview mirror. All the interior amenities will be handled in-house by the AI-driven system. Temperature, music or videos in surround sound, email, work mail, all can be networked by each passenger individually.  Now, to get used to the idea of no steering wheel or brake pedal… Do you recall the report that laughed about how the folks at NASA, The National Aeronautics and Space Agency spent a whole bunch of taxpayer dollars trying to come up with a pen that could write in the zero gravity of space? And do you recall that the Russians had the same issues to confront, but instead of all that research, they simply decided to use a pencil? Turns out that worked pretty well. Also turns out that it never happned quite that way, buts thats another story.

It looks as thought they have the same kind of thinking when it comes to designing autonomous vehicles for the streets of Moscow. In addition, they’ve found ways to economize their runabouts. For one thing they use radar instead of LIDAR, while also implementing other unique designs.

In an article for the website “The Big Think.com,” author Phillip Perry pointed out some basic design changes Moscovites have adopted for the city’s unusual conditions. Moscow has terrible traffic, prayer-inducing merges, road signs that are all but impossible to read, dangerous road conditions and drivers who hazard sudden, scream-worthy maneuvers, which all add to Moscow’s commuting woes. Sadly, this is what 98% of the world’s roads are like, and why one Russian company, Cognitive Technologies Group, may come out ahead in the race to birth the self-driving car.

President and founder of the group Olga Uskova, is skeptical of Silicon Valley’s sunny projections of when autonomous vehicles will go mainstream. The reason, she told The Guardian was that there are too many variables in most places to look out for. In Moscow for instance, “The environment is ever-changing: the snow has covered traffic signs; it’s raining on your windshield, the sun is blocking you. Our people train using these kinds of data.” Note that the most well-known autonomous prototypes, the Financial Times recently reported, have trouble navigating through snow. Uskova assures that her model doesn’t have that problem.

To date, there are 27 companies working on autonomous vehicles. “At the moment, we are the best in the world in the field of road scene perception and detection,” she said. “We have 19 unique patents and inventions. Twenty-two million dollars have been invested in the product and we have real industrial practice in the most severe weather conditions.”

Witness the C-Pilot system in action.

To continue with this story, read more at bigthink.com China Is Going Big on Autonomous Cars, Too 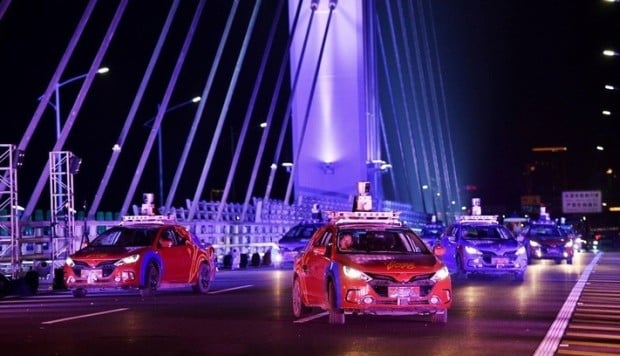 Annual Spring Festival Gala in China is a tightly scripted show beamed to an estimated 800 million viewers. A segment featuring autonomous cars, boats and drones underlined the country’s ambitions to lead in advanced technology  If there were any doubts about China’s ambitions to lead the world in artificial intelligence (AI), the country laid them to rest by showing off its autonomous driving technologies during this year’s Spring Festival Gala, which by some estimates is the world’s most-watched television broadcast.

In an article by Zenn Soo in the South China Morning Post, it is clear to see China has its eye on the future of autonomous vehicles, too and its designs differ from others around the world. It is also developing autonomous boats.

A segment during the five-hour show featured more than a hundred of BYD’s electric cars powered by Baidu Inc.’s Apollo autonomous driving technology. The vehicles, which had roof-mounted sensors, piloted themselves along the Hong Kong-Zhuhai-Macau bridge in figure-eights, a number that is considered auspicious by many Chinese. In the same segment, nearly a hundred driverless boats by Yunzhou Tech sailed under the bridge in the formation of an arrowhead, while 300 light-equipped drones by Beijing-based ZeroTech and Shenzhen’s High Great danced in synchronized fashion in the air as part of a large-scale drone performance, arranging themselves into a three-dimensional shape of a dolphin.’ This Chinese firm leads Tesla, Uber and Apple in self-driving cars, according to the Post article.

China provides government funding to individuals companies, much the same way they support their Olympic teams. American companies are often inhibited by various regulations of the EPA and similar agencies. Most American R&D, too, is financed by investors, not the government.

Baidu has been working on its autonomous driving technology since 2013. Its first self-driving car hit the roads in Beijing in 2015, and the company’s technology made a big splash when Baidu chief executive Robin Li was seen in a self-driving vehicle on public Beijing roads during a live-streamed conference in July 2017. 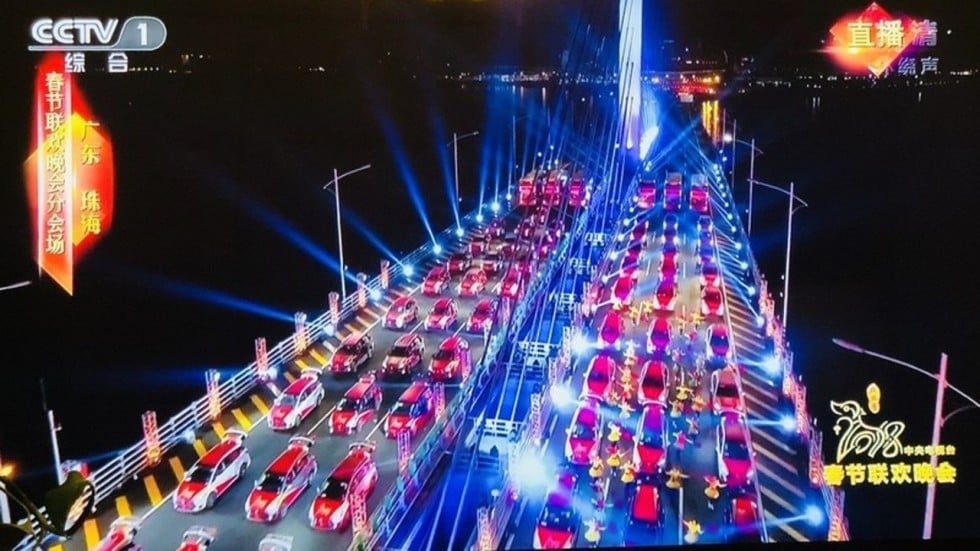 Performers dance around driverless cars lined up on the Hong Kong-Zhuhai-Macau bridge for the Spring Festival Gala. Photo: Baidu